Niagra Falls on the east arm of Quesnel Lake 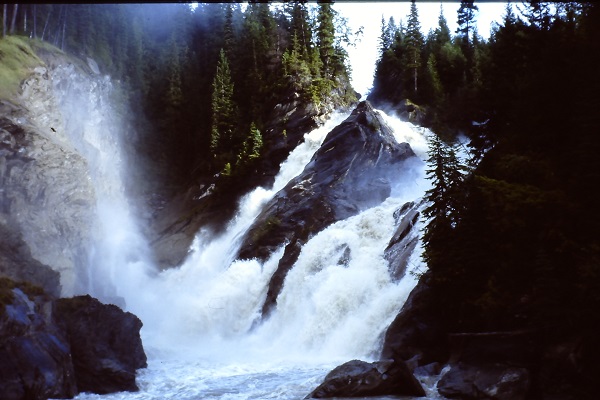 The latest water samples from Quesnel Lake and Hazeltine Creek are consistent with previous results and water located outside the impact area remains safe to drink.

Results in Quesnel River off the Likely Bridge were below drinking water and aquatic life guidelines. Turbidity levels for Quesnel Lake at Hazeltine Creek and in Hazeltine Creek, located in the impact zone, are above the drinking water guidelines. However, by the time water is measured downstream at the Likely Bridge site, turbidity levels are reduced and within acceptable levels.

According to Health Canada, there is no evidence of adverse health effects for aluminum, iron and manganese at levels above the guidelines. No health guideline exists for phosphorus. Drinking water guidelines for manganese and iron are based on taste and staining rather than health issues.

Areas where mines are located can often have elevated levels of metals, meaning naturally occurring metal concentrations are potentially much greater in this region than elsewhere in the province.

E.coli results are all below detection levels with the exception of two samples taken from the Quesnel River off the Likely public dock which were at the lowest detection limit. These results meet the provincial drinking water guidelines and reflect typical concentrations of rivers and lakes throughout BC.

As of Sept. 23, 2014, the Quesnel River off Likely Bridge site has been established as a Federal/Provincial trend monitoring site and is being sampled weekly. Samples collected at this site are sent to two different labs for analysis; the second lab exclusively tests metal and phosphorus samples. These results are currently unavailable and will be posted when received.

Interior Health continues to advise residents to avoid drinking cloudy water. If they notice increased turbidity, sediment, and/or a change in taste or odour, consider filtration and disinfection per normal water practices or use alternative water sources.

In addition to water sample results, reassessment of the high lead result in a single minnow fish, the peamouth chub, collected at Hazeltine Creek on Aug. 27, 2014, is consistent with previous results and confirms the sample is above human consumption guidelines.

The sample was re-analysed in addition to other minnow fish samples. All other minnow and adult fish tissue (trout and salmon) metal results are very low and below the human consumption guidelines for lead.

While the cause of the high lead result is undetermined, it is likely caused by the ingestion of a small lead weight from the angling equipment used to catch the fish. Since the whole fish was tested for metal analysis, the result would include stomach content.

Small-bodied (minnow) fish tissue was reported in a memo dated Oct. 23, 2014, with a single high lead result in a peamouth chub. The result appeared to be an outlier and was sent to the lab for re-assessment. There are currently no lead guidelines for the consumption of fish by wildlife.

All test results have been shared with local First Nations, the First Nations Health Authority, Interior Health and the Cariboo Regional District.

All results and explanations are publically available on the Ministry of Environment's dedicated Mount Polley site.

Mount Polley - Through a Paddler's Eyes

When news broke of the breach of the tailings pond at the Mount Polley mine located near Likely B.C., a group of 4 of us were just about to leave on a 16 day canoe trip in the N.W.T. As we were driving the 1000 kms to our put-in, the conversation in our vehicle was speculative at best. We were hungry for news about what was happening at home. We didn’t have to worry, Mount Polley was the topic of conversation among people everywhere we stopped, especially when they learned that it was all unfolding essentially in our back yard. We made a point of being near a television set to watch the 6:00 p.m. news and saw the impact of the effluent bursting into Quesnel Lake in all of its graphic horror. It seemed clear then but its very clear now that this is a major environmental disaster.

Since returning from our canoe trip I have had access to the significant amount of information that the media is carrying regarding all aspects of this tragedy. I won’t dwell on the how? and who? and why? and when? of this disaster even though I am struggling with my own emotional reaction to what has happened. We all have access to this information and we all have to make up our own minds based on our own reading of the various details. I would like to focus on the lake, the river and paddling.

Quesnel Lake is beautiful. It is huge and deep and wild. Located right in the heart of B.C.’s interior rainforest, it is comprised of three arms, the little village of Likely is located at the extreme end of the West Arm, the point where the Quesnel River flows out of the lake. The Horsefly River flows into the West Arm from the south, there are a number of fishing lodges, particularly on the West Arm. The 77 km. North Arm is remote, the Mitchell River flows into the North Arm out of Mitchell Lake. The 100 km. East Arm is wild with a steep rocky shoreline, it ends just a relatively short hike from Hobson Lake in Wells Gray Park.   Quesnel Lake is surrounded by a large number of smaller lakes, the whole area is a fisher’s paradise.

We have paddled on the lake and river many times. About ten years ago my wife and I along with four friends paddled our voyageur canoe as part of a flotilla organized by the Quesnel River Watershed Alliance.   We were accompanying Fin Donnelly who was swimming the length of the West and North Arms in harmony with the sockeye salmon that were making their way to their spawning beds. Our local paddling club has frequent outings on the Quesnel River, which enters the Fraser River right in the heart of our home, the City of Quesnel.   The Quesnel River has sections of class 3-4 water that kayakers love, the class 2 sections are great for evening or afternoon canoe outings (it is a great teaching river), and for the less adventurous there is gentle class 1 water. A locally based rafting company takes advantage of all of the sections. The river tends to be a late season river, as the winter snow pack stored in the Cariboo Mountains which is the river’s source melts as the summer weather heats up.

One of many amazing rock formations on Quesnel Lake 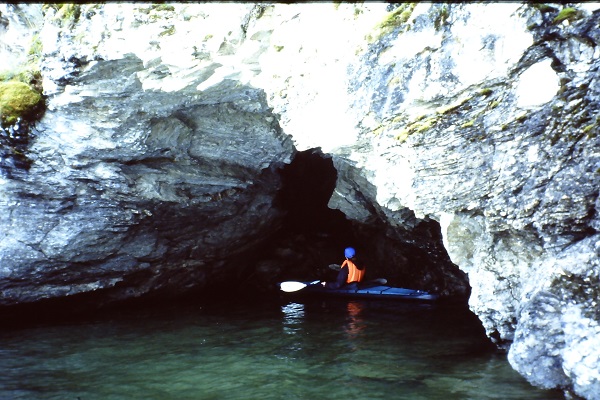 Man has tried his best to destroy the Quesnel River. The river was actually dammed in 1898 just below Likely (which was then known as Quesnel Dam). This was to allow gold seekers access to the river bed in their search for placer gold. Just below Likely is the site of the Bullion Pit, a 3 kilometre long by 180 metre deep hole. This was created between 1892 and 1942 using hydraulic monitors in a process using huge quantities of water under pressure to wash away the overburden in search of the gold bearing gravels that often lie just above bedrock. Twelve million cubic yards of overburden (gravel, sand and silt) were washed into the Quesnel River during the life of the Bullion Pit. In the 1950’s, 60’s and early 70’s, forestry companies in Quesnel began logging in the Quesnel River watershed. The logging method was to stockpile huge numbers of raw logs on the banks of the Quesnel River during the winter and then to push them into the river during the spring freshet when they would float to the Fraser River where they were then impounded in a large holding pond. To facilitate this process, any obstructions in the river, particularly large rocks, were indiscriminately blown up with dynamite, in some cases contributing to landslides.

I have paddled on the Quesnel river with a sea of red sockeye salmon swimming below me. The annual return of B.C.’s salmon to the spot where they were born is indeed one of our world’s most awe inspiring, render-you-speechless wonders. Despite what man has done to this river the salmon still come….and now this! Three

weeks after the breach we are being told that the well-being of both fish and humans is in jeopardy and that the true impact of this spill will only become evident over time. Life as those who lived, worked, camped, fished and paddled in this area knew it before the spill, is now on hold.

There are other holding ponds at other mining sites located very close to the Mount Polley mine. What should we do? As paddlers we are privileged, our place on the lakes and rivers gives us a unique view of the world and particularly of nature’s wonders, a view that others may have never shared. It is incumbent on us to share our view, to speak out and state how special, sensitive, fragile and tenuous our waterways and all that live in and on them really are. Even though nature has shown an incredible ability to rebound from abuse, my worst fear is that we are at a tipping point and that the Mount Polley disaster may be one insult too many for Quesnel Lake and the Quesnel River.

Our canoe trip in the N.W.T. took us down the Peace River and up the Chenal des Quatre Fourches River to Lake Athabasca and then down the Rivière des Rochers and the Slave River to the take-out just above the 20 kilometres of Class 4+ rapids at Fort Smith N.W.T. Our trip had taken us into the heart of the Peace Athabasca Delta in Wood Buffalo National Park, a UNESCO World Heritage Site. The Peace River, which along with the Athabasca River is the major source of water for the Delta, has been dammed twice since 1968. Following this, significant changes took place in the delta area; some channels became very shallow and the natural aquatic habitat of the beaver, moose and waterfowl began to deteriorate. As we paddled, it became apparent to us that water levels in the Delta have dropped and that the Delta and the way of life for all things and beings living there has been changed…..for ever.