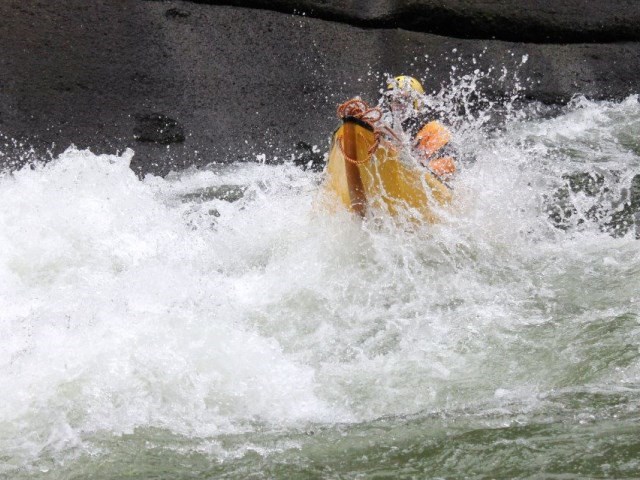 With Joni Mitchell on the radio, singing “You don’t know what you’ve got till it’s gone,” we were cruising, last spring, up to the put-in for a run on the Nanaimo River.

The Nanaimo is one of Vancouver Island’s best open-canoe whitewater runs, featuring continual Class II+ to III- rapids. And when the water level is prime, it’s a priority trip on a Sunday afternoon.

And then we noticed it. As we pulled in to the forestry gate to drop off a shuttle vehicle for the take-out, there on a tree was a realtor’s sign advertising “Prime Acreage for Sale.”  There are three usual take-out points on the Nanaimo, enabling paddlers to choose among a short, a medium, and a longer run. Because the road runs some distance from the river, taking-out involves strenuous hikes of several hundred uphill meters along old meandering logging roads.

We were aware that the land between the road and the river was privately owned by a large timber company. But, as typical Canadian boaters, we always took for granted that the company would not object to a few paddlers walking across their property, as long as garbage wasn’t dumped, nor fires lit. But now?   A For Sale sign on the property containing our take-out path! In fact, For Sale signs all along the road!

We contacted the realtor whose signs abounded. Turns out his real estate agency was actually a subsidiary of the large timber company that owned the land. What a surprise! The realtor cheerfully met with us, a week later, and showed us around the new subdivision

Seems the timber company had decided the land was more valuable to company shareholders as building lots than as land for forest-harvesting. And, no, the company wasn’t interested in allowing an easement to provide recreational access to the river. Belying his pleasant demeanour, the realtor’s message was clear: “Gee, fellas. Too bad, so sad!”

Now, half a year later, we are certainly older and sadder, and maybe a little wiser. We have learned:

We cannot take for granted that, as Canadian citizens, we have a right to access the rivers we value so highly.

Sounds like work! And I just wanted to go paddling! But I suppose that’s the price we will have to pay if we are to continue to pursue our sport in the future.
I guess Joni Mitchell was right!